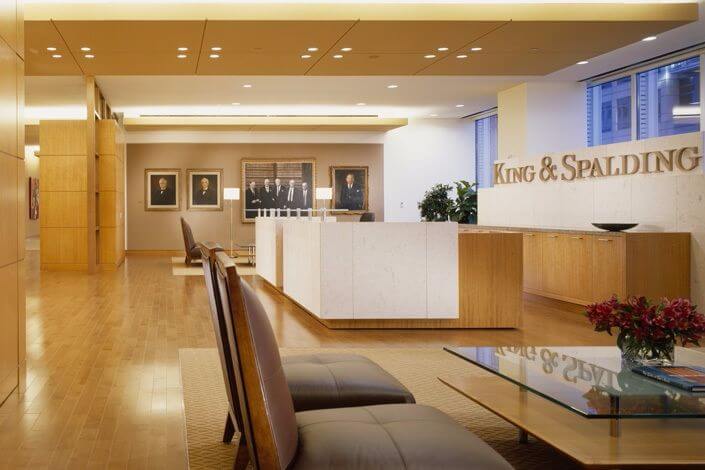 Summary: A former associate of King & Spalding claims the firm froze his pay and eventually fired him when he raised concerns internally over ethical conduct of two partners.

King & Spalding is being sued by a former associate for wrongful termination that prevented retirement plan contributions from vesting. In an exclusive report from Law 360, David A. Joffe alleges that the law firm fired him after he complained internally about unethical conduct by two partners in a case involving ZTE Corp.


Joffe, an associate in King & SpaldingŌĆÖs commercial litigation group, alleges that the froze his pay, denied him bonuses over a two-year period, removed him from the partnership track, and ultimately fired him in December for raising concern over the ethics of two partners. The two partners allegedly made false statements during their representation of ZTE in a case accusing them of illegally disclosing confidential information.

Joffe, a Harvard Law graduate, argues that the firm broke the precedent decided by the New York Court of Appeals in 1992 when they ruled in Wieder v. Skala that there is an implied restriction on the law firmŌĆÖs ability to fire an individual that raises ethical concerns. He also argues that the timing of his termination in December was just weeks before $20,000 in profit-sharing contributions by the firm to his retirement account was set to vest. He states that this violates the Employee Retirement Income Security Act.

His complaint states, ŌĆ£As evidenced by the temporal proximity between the date of plaintiffŌĆÖs termination and the date K&SŌĆÖ contributions were scheduled to vest, K&S terminated plaintiff with the specific intent of depriving him of benefits to which he was entitled under the K&S plan. As a direct and proximate result of K&SŌĆÖ wrongful termination carried out in order to prevent plaintiffŌĆÖs attainment of a right under the K&S plan, plaintiff has been damaged.ŌĆØ


Joffe worked for a time at Davis Polk & Wardwell LLP before joining King & Spalding in 2012. For about two years, he received the normal ŌĆ£lock-stepŌĆØ bonus and annual compensation increases that other associates received based on their years of practice.

In 2014, the firm represented the telecommunications giant ZTE Corp. after Vringo Inc. accused the company of breaching a non-disclosure agreement during settlement discussions in 2013 about VringoŌĆÖs international patent infringement litigation. Joffe was assigned to the case with partners Robert F. Perry and Paul A. Straus. He was concerned about a statement Straus made to U.S. District Judge Lewis A. Kaplan that was untrue when Vringo was requesting a temporary restraining order against ZTE from disclosing confidential information anywhere but a Chinese court.


Judge Kaplan also expressed concern about whether the firm could ethically continue representing ZTE. Kaplan ordered Perry and Straus to show cause as to why they shouldnŌĆÖt be sanctioned. The firm withdrew from representing ZTE, of which the show cause order was still pending when ZTE and Vringo later settled.

Joffe used KaplanŌĆÖs order as an ethical reason to report their behavior to the general counsel and outside counsel hired to represent the firm in the ZTE case. He claims that soon after the firm took ŌĆ£retaliatory actionsŌĆØ against him during his performance review. The firm claims he submitted timesheets late and failed to complete a personal business-development plan, justifying a pay freeze and removal from the partnership track. The firm also stated he would not receive a bonus for his work in 2015. The firm’s actions made Joffe believe they ŌĆ£were penalizing him for the actual or narrowly averted ethical breaches in the ZTE matter that he had reportedŌĆ”and caused him to question whether the firmŌĆÖs management intended to satisfy its ethical duty to report attorney misconduct and ensure that all lawyers at the firm conduct themselves in accordance with the ethical standards of the profession.ŌĆØ

Joffe tried to discuss his concerns with firm superiors on multiple attempts was told during his next performance review in 2016 that his career had ŌĆ£stagnatedŌĆØ even though he was on pace to exceed 2,100 billable hours that year. The partner conducting his performance reviews, David Tetrick, told Joffe to ŌĆ£place a ring aroundŌĆØ it when he expressed concern over the ZTE case. Tetrick warned him to not disclose any non-public information regarding the case to anyone even inside the firm. Two months later he was fired without notice, preventing him from collecting a bonus for the year even though he billed over 2,200 hours. He claims the firm also took back its contributions to his retirement account that was to be vested on January 1.

King & Spalding claims his termination had nothing to do with the ZTE case but was ŌĆ£because he repeatedly refused to comply with directives and expectations that apply to all firm associates.ŌĆØ The firm noted that he was involved in all aspects of the ZTE case, so if there was an issue, he should have immediately said something to the partner or the court.

Do you think Joffe has a valid argument? Tell us in the comments below.

To learn more about attorneys that sued their law firms, read these articles:

Highly-ranked boutique civil litigation firm has an opportunity for an experienced, and confident pa...