Got a tip?
Home » Home » Wheelchair Bound Man Shot by Police in Delaware 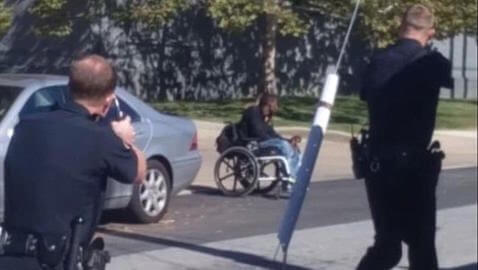 Summary: A 28-year-old man in a wheelchair was shot and killed by police after he allegedly reached for a gun.

According to CNN, Jeremy McDole, who was confined to a wheelchair, was shot and killed by police on Wednesday.


A disturbing cell phone video captured the event, which shows officers raising their guns at McDole as they yell, ŌĆ£Hands up!ŌĆØ and “Drop the gun!ŌĆØ on several different occasions.

McDole did not raise his hands for police. Officers fired, and McDole fell out of his wheelchair and collapsed onto the ground. The incident happened near the nursing home where McDole resided, CBS News added.

According to Wilmington Police Chief Bobby Cummings, McDole was armed with a .38-caliber handgun, which he had allegedly turned on himself earlier that day. Additionally, Cummings said that McDole never complied with the officerŌĆÖs directions.


Cummings explained, ŌĆ£When Mr. McDole began to remove the weapon from his waist, the officers engaged him.ŌĆØ Fearing that McDole was about to shoot at them, the officers fired.

Phyllis McDole hinted that the video shows that her son ŌĆ£didnŌĆÖt pull a weapon. He had his hands in his lap.ŌĆØ

During the video, a witness can be heard saying ŌĆ£put your hands up,ŌĆØ as well as ŌĆ£heŌĆÖs reaching again.ŌĆØ However, it is not clear what McDole was doing when the shots were fired at him.

According to The Guardian, a .38-caliber handgun was recovered from the scene.

Phyllis said that her son was 28-years-old and was paralyzed from the waist down. ŌĆ£This is unjust,ŌĆØ she declared.

Last year, a white supremacist was arrested in connection with a shooting spree.

Cummings explained that at around 3:00 Wednesday afternoon, a call came in that there was a man who had shot himself and was still armed.

Several officers arrived at the scene and approached McDole. They had their guns drawn as they approached him, shouting at him to put his hands up and drop the weapon. The video does not show if he was ever holding a gun as the officers fired.

After a pause, Cummings said that McDole ŌĆ£began to remove the weapon from his waist, the officers engaged him andŌĆöas a result of the injuries Mr. McDole sustainedŌĆöhe lost his life.ŌĆØ