Got a tip?
Home » Breaking News » Two Men Killed in Shootings Outside of Mardi Gras World on Fat Tuesday 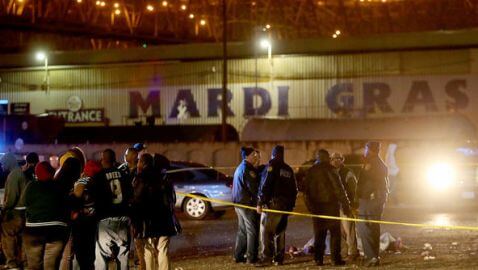 A fatal shooting on Tuesday night in a parking lot outside of Mardi Gras World took the lives of two men, according to a report from The Times-Picayune. A rap concert was being held at the venue. A third man was wounded in a shooting inside the venue. Atlanta rapper Rich Homie Quan was performing on Fat Tuesday.

According to police, the two shootings were unrelated and occurred an hour apart from each other.

An unidentified man sat against a wall outside of the venue crying and saying, “They took my baby, they took my son.”

Deron Hitchens, 25, was one of the victims. Viola Galmon, his grandmother, confirmed to authorities that one of the dead men was her grandson.


“He wasn’t the kind of person to get into this fussing and fighting,” Galmon said.

The second victim, 28, was not identified to the media.


One handgun and multiple bullet casings were found at the scene by police. Authorities said that the two men were hit multiple times. A handful of unoccupied vehicles were also hit with bullets.

“This investigation is very preliminary and investigators are currently in the process of gathering evidence and information to identify the person(s) responsible in this incident, as well as a motive,” Officer Frank Robertson, a spokesman for NOPD, said in a statement early Wednesday.

The first shooting, around 10 p.m. occurred inside the venue. A 25-year-old man was hit in the shoulder. The suspect in the first shooting was not caught, but a description was given to authorities and released to the public.

Ronal Serpas, the Superintendent of the NOPD, said that the shooting that took the lives of the two men was not random. Prior to the violence yesterday, there had been no other fatal shootings on Fat Tuesday at Mardi Gras World.