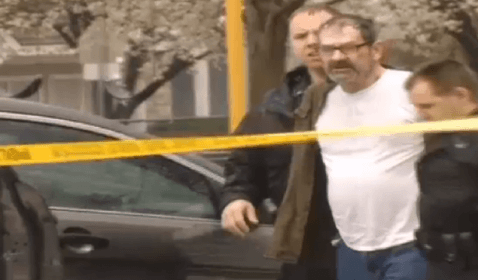 According to a report by USA Today, a TV news video shows the suspect yelling what appears to be “Heil Hitler!” from the backseat of a police car. Authorities also told reporters that Miller had shouted “Heil Hitler” numerous times during shooting and arrest.


In 1987, Miller was the subject of a nationwide manhunt after violating a court order prohibiting him from operating a paramilitary organization. In 1980 he founded the White Patriot Party, which developed from the Carolina Knights of the Ku Klux Klan, a local chapter.

Frazier Glenn Miller and three of his associates, Tony Wydra, Robert “Jack” Jackson, and Douglas Sheets were eventually arrested in 1987 in Ozark during a federal raid of a trailer where authorities found enough weapons “for a small army” after Miller had reportedly declared war on the U.S. government, according to Springfield Mo. News-Leader archives.

The authorities found guns, thousands of rounds of ammunition, grenades, crossbows, police scanning radios and $14,800 in cash. According to the story, a demolition team from Fort Leonard Wood detonated a box that contained 20 pipe bombs. An affidavit for a search warrant for the trailer at the time told federal agents that Frazier Glenn Miller was planning on carrying out his declaration of war against federal judges and law enforcement officials.


A copy of his affidavit, mailed to the News-Leader at the time, listed a point system for killing various minorities and also government officials. Judges were among those worth the most points. Miller “planned on executing them with a variety of weapons, including firearms and crossbows,” the affidavit noted.


Frazier Glenn Miller was named the only suspect for the shooting Kansas City that ended in the death of 3 people. Shootings occurred both at the Jewish Community Center and at retirement home Village Shalom nearby, both located in Overland Park.

Trumbull office of our client seeks Patent Attorney with 3 years of experience. The candidate should...

Denver office of our client seeks Patent Associate Attorney with 2 years of experience. The candida...