Got a tip?
Home » Breaking News » Jon Stewart Takes on the Media and Its Coverage of Mass Shootings 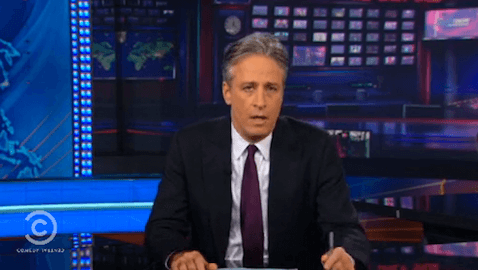 Jon Stewart loves to deliver punch lines and jokes whenever possible, but one episode of his show delivered a very important message; how the media covers mass shootings in this country. He basically attacked media outlets for being more concerned with Kim Kardashian, Justin Bieber, viral videos and sports results than the actual news.

Stewart ends his segment on a recent episode of “The Daily Show:”

And since we can’t always stop this from happening why ever try to stop it from happening? So we are good? Okay let’s get back to the news.


Three months later are we really any closer to solving the mystery of the missing plane?

A tie at the spelling bee both are winners.


Justin Beiber was apologizing this morning for racial offensive comments he made five years ago.

When it comes to dating who should pay the girl or the guy?

Yes, a bear was napping in his hammock.

Serena Williams not only a tennis star, well, she’s also a wedding crasher.

Why critters are attacking…

The most expensive drink ever sold at Starbucks.

Want to do this? This is the ultimate selfie.

Isn’t that easier? Problem solved. We will be right back.”