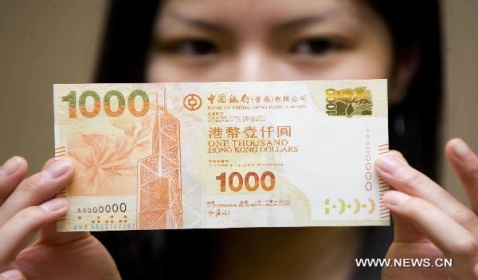 Police said in an e-mailed statement, that there were two people that were arrested in Hong Kong, after 19 forged HK$1,000 notes were found with the cash they were depositing in a bank according to reports by Bloomberg News. The statement said that one person has since been released unconditionally while the other is out on bail, after they were found in the Tsim Sha Tsui district.

A spokeswoman, Angel Yip, said by phone, that the Bank of China Hong Kong staff is trained to detect fake notes and it has set up hotlines to deal with queries.

Gareth Hewett, a spokesman for the bank in Hong Kong stated in an email response to a Bloomberg News query, that HSBC employees are trained to identify counterfeit notes using standard procedures.

The incidence of counterfeit money in most societies is statistically very low. Under Hong Kong law a person who is found guilty of counterfeiting a coin or banknote with the intent of passing or tendering it as genuine is liable to imprisonment up to 14 years.


In pursuance to section 103 of the Crimes Ordinance anyone who wants to reproduce the whole or any part of any Hong Kong currency note for any purpose in any form must apply in writing to the Monetary Authority for approval.