Got a tip?
Home » Home » The Volcker Rule Request Blocked 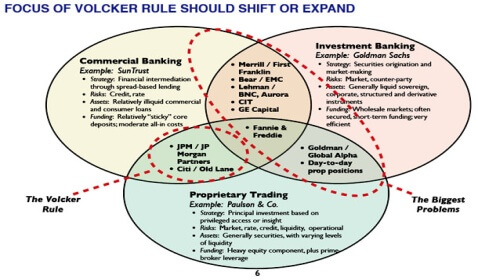 Named after former Federal Reserve Chairman Paul Volcker, the Volcker rule basically stops banks from doing their normal business such as installment loans, residential mortgages, equity credit loans, and deposit services, as well as trading on their own behalf. The Volcker rule was introduced following the recession of 2008, to control the risk associated with the financial sector. Many Wall Street banks were accused of accumulating a massive amount of risk and shady business practices due to the inability of regulators to properly oversee their complex instruments and activities. The Volcker rule aims to protect individuals by developing a more transparent financial framework which can be regulated with greater ease.

The Volcker Rule was first publicly endorsed by President Obama back in January 21, 2010. The proposal specifically prohibits a bank or institution that owns a bank from engaging in proprietary trading that is not at the behest of its clients, and also from owning or investing in a hedge fund or private equity fund, and the rule also limits the liabilities that the largest banks can hold.


The final version of the Volcker Rule has been challenged in a lawsuit. The American Bankers Association, which represents mostly community banks, objects to a portion of the Volcker rule, according to the complaint filed in Washington in federal court. According to Bloomberg News the banks, object to a portion of the rule that will force lenders to get rid of CDOs that are backed by trust-preferred securities. Requiring small banks to divest their holdings in some Collateralized Debt Obligations will cause them about $600 million in losses.

Dave Skidmore, a Federal spokesman, said by email, “We will review the suit, confer with the other agencies and determine a response.”

On December 16, Regional lender the Zions Bancorporation stated that, the Volcker rule would force it to get rid of some prohibited holdings at a cost of about $387 million. The Salt Lake City-based company said in a statement that the company would no longer be able to keep trust-preferred CDOs issued by banks and insurers until they mature. The Volcker rule is often referred to as a ban on proprietary trading by commercial banks, whereby deposits are used to trade on the bank’s own accounts, although a number of exceptions to this ban were included in the Dodd-Frank law. Proprietary trading is very profitable business, and there are supporters as well as angry mobs against this type of trading. High risk can lead to high return, but in these volatile times, risk aversion is high, and anti-bank sentiment also happens to be high.