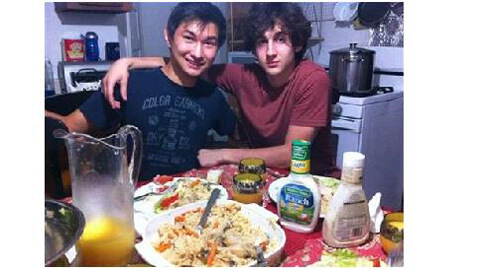 The collection of trials following the Boston Marathon bombing of April 2013 have kicked off with their first conviction: Azamat Tazhayakov was the first of two who were charged with obstruction and conspiracy to obstruct justice for allegedly removing a laptop and backpack from Dzhokhar Tsarnaev’s room. Though the jury did not find him guilty for taking the laptop — it was evidently taken simply for its worth as a laptop, and it was not tampered with to remove evidence — they found him guilty for removing a backpack and disposing of it in a garbage bin. The backpack was recovered from a landfill and found to contain firework casings, a thumb drive, and Vaseline, items believed to be used by Tsarnaev in constructing the pressure cooker bombs that killed 3 and injured 260.

Like Tsarnaev, Tazhayakov is a Russian speaking Muslim, as also is Dias Kadyrbayev, Tazhayakov’s roommate, who is charged with the same. Tazhayakov’s defense lawyer Matthew Myers had presented his client as a nice boy, a “mama’s boy” who wiled his days playing video games and getting high, but who was otherwise innocent of any involvement with the Boston Marathon Bombing. Myers knew the case was still hot in the public eye, and warned the jurors to give his client fair consideration and quell any prejudice they might have against Muslims.


“It’s a brutal day for all of us — somewhat of a surprising verdict,” said Myers. “It’s difficult to try a case in this culture. We have to respect the verdict but we’ll press on with the motions we have to make.”

Naturally, he seeks to secure the “most lenient sentence possible” for his client — up to 25 years is the maximum — and he plans to appeal the decision as well.

Prosecutor US Attorney Carmen Ortiz naturally approved the decision, and said so in a brief address to reporters.


The verdict doesn’t bode well for Kadyrbayev in his trial, which is scheduled for Sept. 8, as he was characterized as the leader behind the conspiracy to hide evidence. The recovered backpack, meanwhile, has provided evidence that will be brought against Tsarnaev.

Federal agents further claimed Tazhayakov knew long before the bombing that Tsarnaev claimed Islamic martyrs “go to heaven with a smile on their face” and stated he knew how to build a bomb. Such claims go against the defense’s unsuccessful attempt to present Tazhayakov as an innocent and unwitting friend to the alleged bomber.