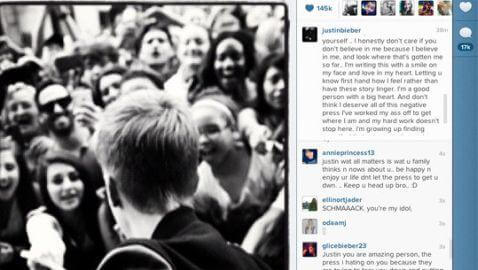 Justin Bieber recently went on a rant that trashed people who are struggling with their finances, most notably Lindsay Lohan, according to TMZ. He posted his rant on Instagram, saying, “It must be scary to some people to think that this is just the beginning [for me]. I know my talent level …”

He then delivered an incredible low-blow against Lohan, saying, “… to those comparing me to Lindsay Lohan look at her 2012 tax statements ;)”


The pop star has apologized for his comments about Lohan and her financial situation. Bieber spoke with TMZ and said, “My post was only up for a few minutes but I realized right away that what I said at the end was wrong and distracted from what I was trying to say.”

“I immediately deleted it and rewrote it so it would show what I was really feeling and those words are up now.”

Not 10 minutes after he deleted his rant from Instagram, Bieber posted it again, but removed the comments made about Lohan. We have embedded a screenshot of the rant posted to Instagram in this post, courtesy of TMZ. Let us know your thoughts about the singer and his comments regarding Lohan in our comments section.