Got a tip?
Home » Weird News » Sink Hole Swallows Florida Man from Out of His Bed 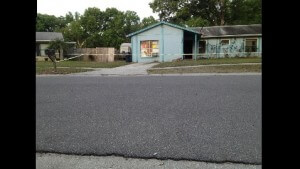 Jeffrey Bush was asleep in bed a Tampa suburban home when a sink hole opened up from under him and swallowed him alive. His brother Jeremy desperately dug through refuse trying to rescue his brother, but was himself barely rescued when police arrived on the scene.

The hole opened up Thursday night, and while sink holes are common enough in Florida — the state is bedded on limestone, which can be eaten away making holes — it is uncommon for people to fall into them.

“I heard a loud crash,” said Jeremy Bush, “like a car coming through the house. I heard my brother screaming and I ran back there and tried going inside his room, but my old lady turned the light on and all I seen was this big hole, a real big hole, and all I saw was his mattress.”


The sinkhole is around 20 to 30 feet across and is contained within the house. Leland Wicker, the owner of the house said that the home passed sinkhole inspection in August and that was also covered for sinkholes. If true, it seems there is no sure way to prevent such catastrophes.

The rest of the family, including four other adults, a child, and two dogs, were able to escape safely, though with a great sadness for Jeffrey.

Janell Wheeler stayed outside the house Thursday night, sleeping in her Ford Focus with her dog, Baby Girl. “I just want my nephew,” she cried.


The Hillsborough County Fire Rescue Chief Ron Rogers has not allowed any of the rescue team to go into the hole — too dangerous and unstable — but their equipment detected no signs of life from within. It is assumed that Jeffrey died in the fall.

“I know in my heart he’s dead,” Jeremy said. “But I just want to be here for him, because I love him. He was my brother, man.”