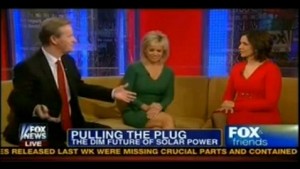 Well Fox News is putting its foot in its mouth again. Per its conservative agenda, the news station occasionally makes gaffes or statements that are a bit untruthy. Recently, when discussing why Germany’s solar-energy industry has advanced so much more than ours, they didn’t cite the higher subsidies that the German government gives to the industry, but instead stated that Germany is such a sunnier place than the U.S. Nevertheless, the only state that gets as little sunlight as Germany may be Alaska.

“The industry’s future looks dim,” said host Gretchen Carlson, and went on to criticize Obama’s “failed” solar subsidies. “The United States simply hasn’t figured out how to do solar cheaply and effectively. You look at the country of Germany, it’s working out great for them.” Carlson asked her expert guest, Fox Business reporter Shibani Joshi, why Germany’s solar-power industry is doing better. “What was Germany doing correct? Are they just a smaller country, and that made it more feasible?”

Joshi’s answered, “They’re a smaller country, and they’ve got lots of sun. Right? They’ve got a lot more sun than we do. The problem is it’s a cloudy day and it’s raining, you’re not gonna have it.” California may be sunny, “but here on the East Coast, it’s just not going to work.”


Almost the entire country gets more sun than Germany does in its sunniest parts. The difference clearly is that their government has paid more subsidies to help the industry along, letting it get established, and become mature and stable.