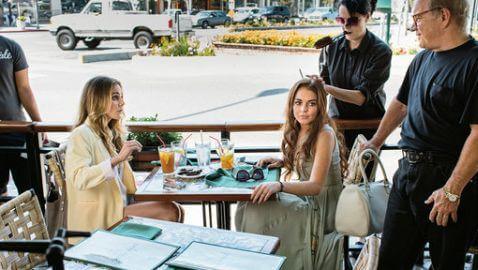 According to a writer who was embedded in the production of the movie “The Canyons,” Lindsay Lohan was a disaster on the set. The author, Stephen Rodrick, wrote the article for The New York Times and said that he watched as Lohan got into her car and drove off the set following a drinking session. Rodrick said that he was permitted to chronicle the production from the beginning until the end.

Rodrick said that Lohan was fired initially after she blew off two days of filming and then arrived at the director’s hotel room crying and pounding on the door while begging to get her job back. According to Rodrick, Lohan remained in the hall for close to 90 minutes before she decided to leave.

The producers “all hoped they would still have a lead actress in the morning.”

Rodrick points out in the article that Lohan lost it prior to filming a sex scene that required her to get naked, locking herself in a closet. The director begged her to film the scene and even stripped naked to prove to Lohan that nothing was wrong and that the scene is no big deal, which worked. Lohan got naked and filmed a sex scene that lasted 14 minutes.


The article also said that Lohan partied until 5:30 a.m. with Lady Gaga when she had a call time of 6 a.m. that same morning. Lohan arrived to the set at 9 a.m., but left not long after arriving because a doctor said that she was too sick to film that day.

The night Lohan and Gaga partied, Gaga posted a picture of Lohan on her website and wrote the following caption: “I love to stay up late and take pictures of beautiful celebrities.”