Got a tip?
Home » Home » Nixon Peabody Gets $1 Million for Rochester Expansion 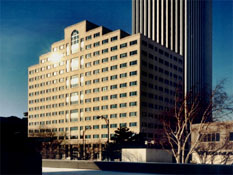 , one of the largest law firms in the US, told the County of Monroe, New York Industrial Development Agency board that it will expand into existing space at the Clinton Square Building in Rochester.

The Am Law 100 firm, founded in 1875, occupies the fourth floor, and floors nine through 14. Nixon Peabody plans to renovate the space, eliminating some legal libraries and allowing for 20 new employees over three years.

The building will also be the site for the law firm’s global operations center. The firm has 825 employees in 19 locations worldwide. In Rochester, the firm employs 373 people.


On Tuesday, the COMIDA board approved about $1 million in property-tax and sales-tax abatements for the project. Contingent upon lease negotiations and closing on COMIDA incentives, the law firm could sign a new deal with Broadstone Real Estate possibly in February, said Scott Turner, managing partner.

The project had the backing of Rochester city government, which is supporting its own payment-in-lieu-of-taxes program.

Judy Seil, COMIDA executive director, said she expects the abatements will produce $5 million in taxpayer benefits, including the new jobs. Seil said the average job could pay at least $40,000 annually.