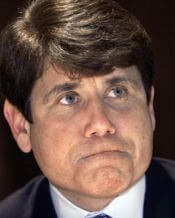 The Washington Post reports that the mysterious “senate candidate” that Blagojevich is recorded on tape saying offered $500,000 in campaign funds to the governor in exchange for Barack Obama’s senate seat, may be none other than Illinois representative Jesse Jackson Jr.

In a press conference late today, Jackson said, “I reject and denounce pay-to-play politics and have no involvement whatsoever in any wrongdoing. … I did not initiate or authorize anyone at any time to promise anything to Governor Blagojevich on my behalf. I never sent a message or an emissary.”


The National Law Journal says that over the course of the five-year probe that led to Blagojevich’s arrest this past Sunday, the governor was defended by a high-powered criminal defense attorney from Chicago’s Winston & Strawn.

But when Blagojevich showed up in court this week, he was represented by an old friend from a little-known Chicago criminal defense firm. Attorney Sheldon Sorosky of Kaplan & Sorosky represented Blagojevich during the federal court bond hearing.

Sorosky was probably a stand-in to give the governor more time to choose counsel with more resources, other attorneys said. Better-known Chicago defense attorneys Michael Monico and Terry Gillespie were both mentioned as possibilities. The governor’s chief of staff, John Harris, was also charged in the complaint. He has hired Terry Ekl, a prominent suburban litigator with Lisle, Ill.-based Ekl Williams.

Douglas E. Schoen at Forbes.com suggests what some have already been saying — that Blagojevich didn’t do anything that doesn’t go on all the time, political “horse trading.”


Yes, the wiretaps reveal clear and unambiguous evidence that Blagojevich hoped to get something in exchange for the appointment. But this kind of horse trading, in my experience, goes on all the time. It usually isn’t articulated as bluntly as it apparently was here, though–and there usually aren’t as many wiretaps marshaled as evidence.

Dennis McCauley at GamePolitics points out the “delicious irony.” Blagejovich was a vocal critic of the video game series Grand Theft Auto, which features criminal acts and profanity. He tried to pass a state law banning sales of “violent” video games to minors.

…in a yummy twist of fate, U.S. District Court Judge Matthew Kennelly, who ruled in 2005 that Blagojevich’s video game law was unconstitutional, was one of two federal judges who authorized recent FBI wiretaps that led to Blagojevich’s downfall.

Now that Blagejovich has been exposed as a key proponent of criminal acts and profanity, we can ask him who’s more responsible for scholl shootings — video game creators or corrupt politicians.