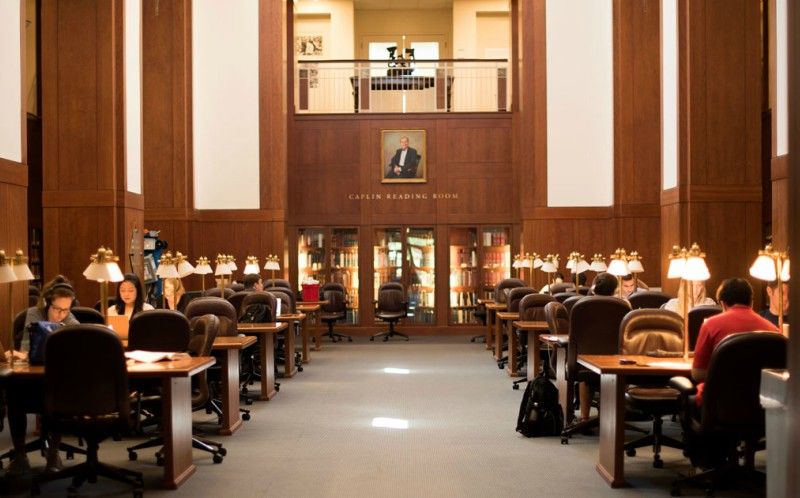 Summary: In an effort to maintain a calm atmosphere at the law library, especially during exam periods, UVA Law will not allow nonstudents to enter the library.

After an appearance by an unwanted person and the arrest of a protester, the University of Virginia law library put in place an immediate ban on who can access the law library during the exam period. The sudden ban was enacted after Jason Kessler showed up at the library to research some of his upcoming court cases, stirring the emotions of those on campus and in the community.


While Kessler, organizer of the Unite the Right rally, came on campus on April 18 quietly, his presence caused a disruption during an already stressful time for students. Kessler stated he was studying previous cases and court laws to prepare for upcoming court cases he was involved in. Even though he sat quietly at a desk, word spread quickly across campus that the white supremacist was there.

One of the law librarians, Ben Doherty, excused himself when he saw Kessler enter the library. Doherty is an active member of Showing Up for Racial Justice group and has been targeted by Kessler on Twitter before, according to C-Ville.

A second-year student said, ‚ÄúA group of students and Professor [Anne] Coughlin were telling him to leave. Video was taken by him and by those who went to silently protest.‚Äù For nearly two hours, students stood around Kessler to silently protest his presence.


In anticipation that things may get violent, the school had two police officers stand guard. Eventually, the group of students taunting him caused Kessler to make outbursts of racist and sexist remarks as he left the library. He apparently had called a friend to come pick him up. Ever since he allegedly organized for hundreds of white supremacists to carry tiki torches across the UVA campus law summer, those at the school have demanded a stop from him being allowed on campus.

Generally, the law school library is open to the public during business hours but Professor Coughlin is fighting to get that changed. She has asked the university, on behalf of the law school, for an outright ban against Kessler from law school property but they have rejected that request. University policy dictates that a trespass warning can only be issued when a crime has been committed or a university policy violated on Grounds.


Kessler‚Äôs appearance prompted an impromptu forum to discuss it and call for action from the administration. Dean Risa Goluboff said she ‚Äúlet down her students‚Äù by allowing him on campus. Several days went past and the school had still not done anything, causing many to get upset. Eventually UVA law spokesperson Mary Wood announced that they had been working with President Teresa Sullivan, the police, and university counsel to go over the options.

Kessler reappeared at the library on April 25. He was in a staff members office when a community activist also appeared, causing a commotion. The activist, Eric Martin, was then arrested by two police officers on hand, charging him with trespassing.

Kessler left soon after as well but the incident resulted in an immediate response from Dean Goluboff. She sent out an email stating, ‚ÄúSince last week, we have been working toward limiting access‚Ä¶ and the plan was for the new policy to go into effect tomorrow morning. Given today‚Äôs events, I have decided to implement that policy immediately. ‚Ä¶ These two trying events have caused much distress. I share in that distress, and I am devoting my full attention to these matters.‚Äù Goluboff noted that she is seeking ‚Äúadditional steps,‚Äù according to The Daily Progress, which includes changes to its free speech policy.

After May 11, nonstudents will be able to return to the library. For now, those wishing to enter the law library will be required to show university identification.

Do you think banning someone because you disagree with their beliefs or don‚Äôt like them is legal? Share your thoughts with us in the comments below.

To learn more about the University of Virginia School of Law, read these articles: