On Memorial Day, President Donald Trump paid his respects to the Unknown Soldier at Arlington Cemetary and tweeted his condolences to the brave men who lost their lives in the Portland stabbing on Friday.

“The violent attacks in Portland on Friday are unacceptable. The victims were standing up to hate and intolerance. Our prayers are w/ them,” Trump tweeted from the official¬Ý@POTUS account.

On Friday, a self-proclaimed white supremacist harassed two Muslim women at a light-rail train station in Portland, Oregon. Three good Samaritans intervened; and the harasser,¬ÝJeremy Joseph Christian, 35, of North Portland, stabbed them in retaliation, killing two and injuring one.

Liberals online complained when Republican Trump did not make a statement right after the attack had occurred. The 45th President of the United States is known to be an avid tweeter on his personal account, and he often provides rapid fire responses to events that interest him such as¬ÝSaturday Night Live.¬Ý


Before Monday, acclaimed journalist Dan Rather wrote on¬Ýsocial media a plea for Trump to acknowledge the men who had died, trying to protect two minority teenage girls.

“Dear Pres Trump, Their names were Taliesin Myrddin Namkai-Meche + Ricky John Best. I wish we would hear you say them,” Rather said. “This story may not neatly fit into a narrative you pushed on the campaign trail and that has followed you into the White House. They were not killed by an undocumented immigrant or a “radical Islamic terrorist.” They were killed in an act of civic love, facing down a man allegedly spewing hate speech directed at two teenage girls, one of whom was wearing a hijab. That man seems to have a public record of “extremist ideology” – a term issued by the Portland Police Bureau.”


Local police identified¬Ýthe two men killed as¬ÝTaliesin Myrddin Namkai-Meche, 23, and Ricky John Best, 53. Namkai-Meche was a recent graduate of Reed College. Best was a veteran and a father of four.

Micah David-Cole Fletcher was the third man who was stabbed, and he is currently in the hospital, according to¬ÝBuzzfeed.¬Ý

The three were attacked at the Portland station after they tried to help two teenagers. After 5 pm, the suspect was yelling obscenities¬Ýbefore he focused on one of the girls’ hijabs. He began shouting racial slurs at the two, and that prompted Namkai-Meche, Best, and Fletcher to step in, which caused the suspect to stab them “viciously,” according to local police.

The two girls fled the scene but were later identified. One of them spoke to CNN and tearfully said, “They lost their lives because of me and my friend.”

Police identified the suspect as¬ÝJeremy Joseph Christian, who has already been booked on two counts of aggravated murder, two counts of second-degree intimidation, and being a felon in possession of a restricted weapon.

Christian was known in the area for his white supremacist views. The man, who had a long history of crminal activity, would frequently perform the Nazi salute in public, and he made several anti-Semitic and Islamaphobic comments online. 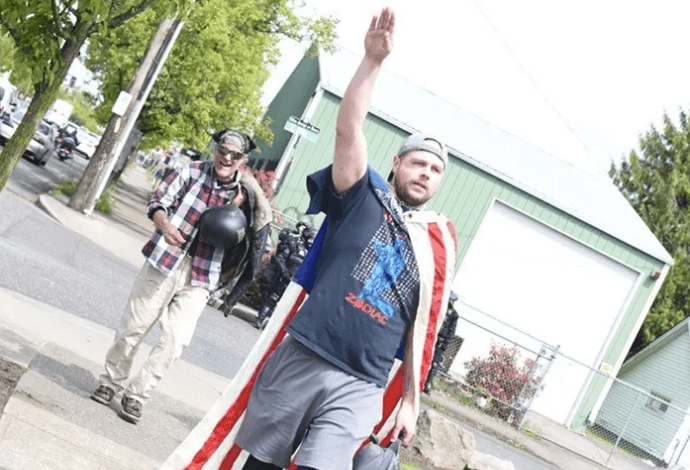 What do you think about Trump’s statement? Let us know in the comments below.