Got a tip?
Home » Celebrity News » Miley Cyrus’ VMA Date Turns Himself in to Police 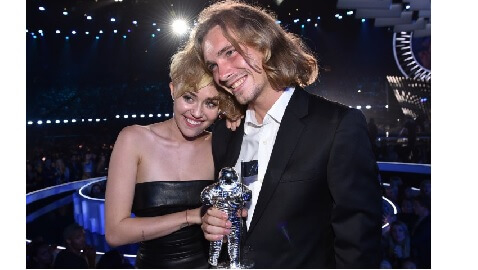 Summary: the homeless man who accepted Miley Cyrus’ music award turned himself in to the police in answer to the warrant for his arrest.

The young homeless man Miley Cyrus arranged to receive her MTV Video Music Award on Sunday August 24 has since turned himself in to the police for the Oregon arrest warrant against him issued in November 2011 after he stopped meeting up with his parole officer regarding a trespassing conviction from 2010.


Jesse Helt, 22, had been charged and convicted of criminal mischief and criminal trespass when he invaded the home of a man he thought was selling bad marijuana. After skipping out on his parole officer, he moved to Los Angeles to live the streets in hope of landing a gig as a model. Cyrus met him through the Hollywood homeless center My Friend’s Place, a charity her friend Trevor Nielson, co-founder of Global Philanthropy Group, suggested she take part in.

Indeed, Helt used the award ceremony to discuss homelessness. “I am accepting this award on behalf of the 1.6 million runaways and homeless youth in the United States who are starving, lost, and scared for their lives right now. I know this because I am one of these people.”

As the Associated Press reported, Nielson explained that “Jesse Helt turned himself in tonight to Polk County authorities to address his outstanding legal issues. Miley Cyrus will be assisting him with this process, and they both are committed to working to help the other 1.6 million youth who experience homelessness in America each year.”


His visibility on national television inspired Oregon authorities to point out he still had an outstanding warrant from 2011.

Cyrus, meanwhile, has pledged to fund Helt’s legal aid, a gesture to which his mother replied, “God gets the glory and she gets the credit.”