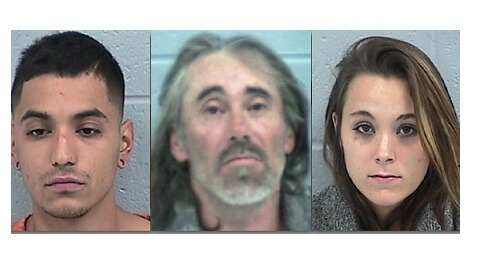 Some people just cannot let Bigfoot go and now the unsuspecting creature is being used as a scapegoat for something more serious. Late Saturday night, according to The Huffington Post, three people were on a search for the infamous hairy creature and their little adventure ultimately led to them being arrested. A fourth person was critically injured from a gunshot wound. Twenty-one year old Omar Pineda was arrested by the Oklahoma police department after accidentally shooting his friend in the back. He told police he got startled and ŌĆ£spookedŌĆØ after hearing a ŌĆ£barking noise.ŌĆØ The damaging bullet entered through the victimŌĆÖs back, penetrating through his stomach, requiring him to receive some extensive surgery. However, he will survive the ŌĆ£bogusŌĆØ Bigfoot misfire.

The Rogers County deputies consider the situation a waste of time and would have preferred the trio to simply tell the truth rather than explaining the situation as a search for the elusive, somewhat fictional Sasquatch. The two other people involved were PinedaŌĆÖs wife and father-in-law. ThatŌĆÖs where the story gets sticky. The father-in-law, Perry Don James, is a convicted felon and was seen throwing a gun into the pond, which led to a police diving team to search for the suspicious weapon. He was then charged with possession of a weapon and evidence destruction. The wife, Lacey Jane Pineda, was arrested for lying to police about the exact details of the shooting. Her husband is charged with ŌĆ£careless use of a firearm.ŌĆØ


Oklahoma is not a famous area known for Bigfoot sightings so the trio may have wanted to research their so-called story a little better. Sheriff Scott Walton even believes that an arrest on the three individuals could have been completely avoided. He commented with, ŌĆ£If they had just been factual, upfront and truthful with us and explained that this was truly an accident, as strange as it might sound, we would have went ahead and investigated and probably nobody would have gone to jail, but when you start off with an explanation like that, how do you believe anything after that?”

There have been 3,313 Bigfoot sightings in The United States over ninety-two years, and even the well-known and respected Jane Goodall believed in the legend of the Sasquatch. Proving the existence of Bigfoot will never die down. For some people itŌĆÖs a hobby and a way of life. For others itŌĆÖs a little bit of media attention. One thing is certain. There will always be believers and nonbelievers of Bigfoot.