A video has been posted online that captured a brutal mugging at an elevated train in Brooklyn, according to The New York Times. In the video, you can see the woman walking down the stairs. She is carrying a large handbag.

As you continue to watch the video, you notice a hooded man walking fast behind her, trailing her. The robbery seemed to be planned and it took place around 2:40 a.m. on March 9 in the stairwell of the 18th Avenue F train station in Borough park, Brooklyn.


The police department released the video on Tuesday and it shows footage from various angles. The victim, 56, is seen struggling with the man who attacked her. The woman tries to get away, which is when she is thrown to the ground and has her back taken. She is then kicked multiple times before the man empties the stuff out of her back and goes through her stuff.

As the video concludes, you can see the woman running out an exit as the man pursues her. The victim suffered minor injuries, according to officers. It is not known what items were taken from the woman’s purse. The man was wearing a dark hoodie with the letters Alpha Phi Delta on its front. The number 27 and “Stugots” was on the back of the hoodie.

The suspect, 21-year-old Aidan Folan, has been arrested in connection with the crime. Folan has been charged with robbery and assault. 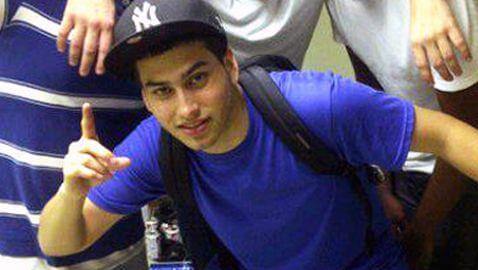