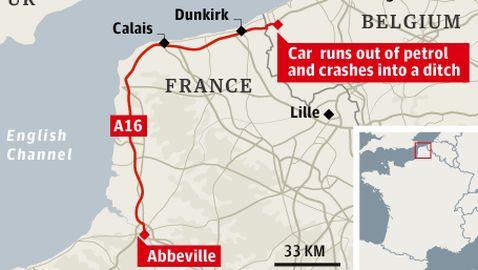 Frank Lecerf, of Pont-de-Metz, close to the French city of Amiens, was headed out for his weekly errands recently and is lucky to be alive today, according to The Atlantic and The Guardian. Lecerf was driving his Renault Laguna, traveling at 60 miles per hour, when the speed dial jammed. He tried to apply the brakes, but the vehicle did not slow down. Instead, it sped up, with the car accelerating to higher speeds each time he hit the brake.

Lecerf’s vehicle finally hit 125 mph and stayed stuck there for one hour. He called the police while in his vehicle and told them what was occurring. They sent an escort to him so he could navigate the traffic. Emergency personnel warned toll collectors to raise their gates and officers cleared vehicles from roads to keep Lecerf and the public safe. Lecerf was connected with a Renault engineer, who regretfully could not help the car stop.


“My life flashed before me,” Lecerf later said to Le Courrier Picard. “I just wanted it to stop.”

The car eventually ran out of gas prior to it slamming into another car or a building. It finally stopped in a ditch in Belgium in the town of Alveringem. He has filed a lawsuit against Renault, which is a vehicle adapted for disabled drivers.

Lecerf noted that this was not the first time his car’s speed dial jammed while he was driving it, but this was the highest speed the vehicle got stuck. He had the car examined by Renault, who told him that there were no problems and that the vehicle would be fine.


The lawyer for Lecerf said that his client is filing a complaint for “endangerment of a person’s life.”