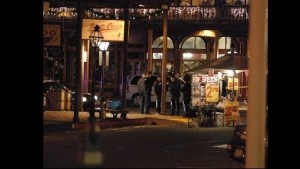 With the predominance of shootings lately, it seems after any event — a theater opening, a parade, a holiday — if a shooting is in the mix, we are not overly surprised. Such is the case with a shooting that took place outside of Old Sacramento on this New Year’s Eve.

What began as an argument inside a bar at 9:38 p.m. Monday soon escalated into a physical confrontation. When an employee attempted to disperse the fight, he was shot, as were another man and a woman. A security guard responded by firing at the shooter, and after a gun fight, in which both were injured, the 22-year-old shooter escaped into the crowd of holiday revelers.

Nevertheless, he was quickly chased down and apprehended by authorities.


The midnight fireworks that were anticipated to attract 40,000 people were canceled. The name of the 22-year-old has not been release pending further investigation. He, the security guard, and a 30-year-old woman survived with relatively minor injuries. The bar employee and the other man, who both suffered multiple gun wounds, are dead.

With such a pattern as this, with guns coming into play during public events, it does unsettle things and put an edge of angst in the air.