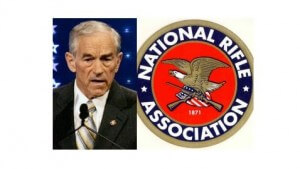 Now that Republican Rep. Ron Paul is retiring, it’s only natural that we’ve got his M.O. down pat. When, in response to the shooting in Sandy Hook, government is buzzing for gun legislation, we know already that he is going to support the Second Amendment as the political right has typically interpreted it. I suppose we should also have expected that he denounced a plan coming from the right as well. The National Rifle Association has called for armed officers to protect every public school the way they already do for banks and elected leaders; this was the plan spelled out by NRA head Wayne LaPierre last Friday

“The only thing that stops a bad guy with a gun is a good guy with a gun,” he said, with standard NRA logic, and Paul was even willing to agree that “more guns equals less crime,” which sounds a little like crazy talk on the one hand, but as he says “private gun ownership prevents many shootings.”

Nevertheless, Paul is absolutely against turning schools into versions of our paranoid and security-cramped airports. “Do we really want to live in a world of police checkpoints, surveillance cameras, metal detectors, X-ray scanners and warrantless physical searches? We see this culture in our airports: witness the shabby spectacle of once proud, happy Americans shuffling thought long lines while uniformed TSA agents bark orders. This is the world of government provided ‘security,’ a world far too many Americans now seem to accept or even endorse.”


There is some exasperation in the last phrase, that America, which is supposed to be a champion of freedom, is tolerating such drastic impositions on their rights, comforts, and liberties.

“Predictably, the political left responded to the tragedy [in Sandy Hook] with emotional calls for increased gun control. This is understandable, but misguided. The impulse to have government ‘do something’ to protect us in the wake of national tragedies is reflexive and often well intentioned,” said Paul. “The political right, unfortunately, has fallen into the same trap in its call for quick legislative solutions to gun violence. If only we put armed police or armed teachers in schools, we’re told, would-be school shooters will be dissuaded or stopped.

“I don’t agree that conservatives and libertarians should view government legislation, especially at the federal level, as the solution to violence. Real change can happen only when we commit ourselves to rebuilding civil society in America, meaning a society based on family, religion, civic and social institutions, and peaceful cooperation through markets.”


These are the enduring ideas of Paul’s career. However, telling government to back off and let these institutions and organizations grow on their own requires a farmer’s patience, which it seems America and its government entirely lacks.