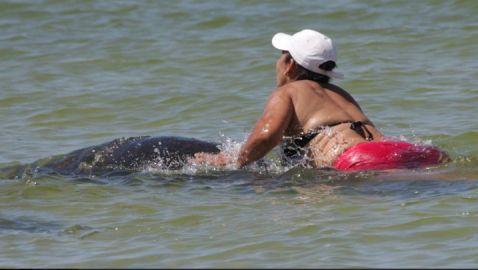 It has been reported by Reuters that a woman in Florida who was photographed riding an endangered manatee two months ago was arrested Saturday on misdemeanor charges, according to authorities.

Ana Gloria Garcia was arrested by deputies of the Pinellas County Sheriff’s Office without any incident where she works. Gutierrez is 53 and is employed at a Sears store in St. Petersburg. She was arrested on a warrant for violating the Florida Manatee Sanctuary Act by riding the manatee.


According to the act, Florida makes it illegal to “annoy, molest, harass or disturb” manatees. The survival of manatees is threatened by man-made issues, such as collisions with boats. Any violations of the act are considered second-degree misdemeanors.

There were reports back on September 30 of a woman, who had yet to be identified, touching and riding a manatee. Manatees can reach 12 feet long and weigh as much as 1,800 pounds. The incident occurred at Fort Desoto Park, just a couple of miles from St. Petersburg. Gutierrez contacted the sheriff’s office just two days after the picture hit the media so she could turn herself into police.

Gutierrez admitted to what she did and said that “she is new to the area and did not realize it was against the law to touch or harass manatees,” according to the sheriff’s office press release. The office did not say what Gutierrez would face in terms of penalties is she is convicted of her crime.