Got a tip?
Home » Breaking News » Hezbollah Leader Calls for Protests in Response to ‘Innocence of Muslims’ Video 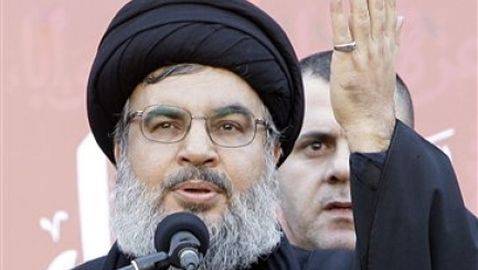 On Sunday, Pakistani protestors broke through a barricade close to the U.S. Consulate in Karachi. The protests caused a clash with police, leading to the death of one protestor. The Hezbollah leader, Sheik Hassan Nasrallah, called for protests against the U.S.-produced movie ‘Innocence of Muslims.’

Nasrallah appeared on television to deliver his speech asking for the protests. In the speech he said that the United States has to be held accountable for the movie. The U.S. government did condemn the film.


“The ones who should be held accountable and boycotted are those who support and protect the producers, namely the U.S. administration,” Nasrallah said. Nasrallah asked for protests to occur on Monday, Wednesday, Friday, Saturday and Sunday.

“We should not only express our anger at an American embassy here or there. We should tell our rulers in the Arab and Muslim world that it is ‘your responsibility in the first place’ and since you officially represent the governments and states of the Muslim world you should impose on the United States, Europe and the whole world that our prophet, our Quran and our holy places and honor of our Prophet be respected,” Nasrallah said in the speech.

According to Rian Harris, a spokeswoman for the U.S. Embassy in Islamabad, said that all of the Americans who work at the Karachi consulate were safe. Hafiz Mohammad Saeed, the leader of Jamaat-ud-Dawa, spoke to a crowd of protestors as well. He has a $10 million bounty from the United States on his head. He demanded that the government of Pakistan close the U.S. Embassy and the consulates in Pakistan until the makers of the movie are punished.


The movie caused protests on Tuesday when the walls of a U.S. Embassy in Cairo, Egypt were breached by Islamist protestors. Also on Tuesday, the U.S. Ambassador to Libya, Chris Stevens, was killed with three Americans when the consulate in Benghazi was attacked.

“I think that we have to continue to be very vigilant because I suspect that … these demonstrations are likely to continue over the next few days, if not longer,” U.S. Defense Secretary Leon Panetta said.


The interim president of Libya, Mohammed el-Megarif, said that those who attacked and killed Stevens seemed to have planned the attack for quite some time. He went as far as to say that the September 11 date was chosen to mark the anniversary of the 9/11/01 attacks.

“All this indicates clearly that the attackers are well trained and well prepared and have planned this in advance,” el-Megarif said.

Susan Rice, the U.S. Ambassador to the United Nations, said that the evidence shows the attack to be a spontaneous one.

“It seems to have been hijacked, let us say, by some individual clusters of extremists who came with heavier weapons,” Rice said.