Got a tip?
Home » Breaking News » Teachers in Chicago On Strike 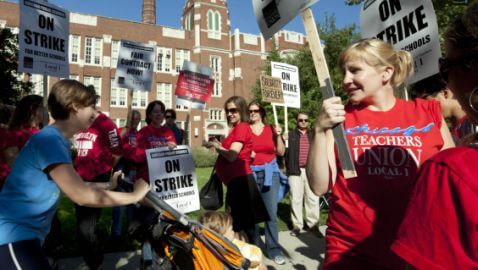 On Sunday, no deal was reached between the 25,000 public school teachers and the city of Chicago, according to CBS News. This is the first time the teachers went on strike in 25 years. Sunday night, the president of the Chicago Teachers Union, Karen Lewis, said that there was progress with the talks but that “we have failed to reach an agreement that will prevent a labor strike.”

The teachers in the city’s public schools have an annual average salary of $71,000 and the sides were close to agreeing on wages. The issues with the new contract are performance and accountability of the teachers. The union feels that those two items are threats to job security. Chicago’s mayor, Rahm Emanuel, said, “I am disappointed that we have come to this point, given that even all the other parties acknowledge how close we are because this is a strike of choice. Because of how close we are, it is a strike that is unnecessary.”


David Vitale, the president of the Chicago Board of Education, said, “There’s only so much money in the system. There’s only so many things that we can do that are available to us. At this juncture, it is clearly their decision. … We’ve done everything we can.”

“We are not far apart on compensation, however we are apart on benefits,” Lewis said. “We want to maintain the existing health benefits.”

According to the union, there is concern that a brand new teacher evaluation “could result in almost 6,000 teachers – or nearly 30 percent of our membership – being discharged within one or two years. This is unacceptable and leads to instability for our students.”


At 6:30 a.m., teachers began picketing at schools as parents were looking for options for their children. There will be 140 schools open for students from 8:30 a.m. to 12:30 p.m. but there will not be any instruction taking place.

Not affected by the strike are the charter schools in the city, which have roughly 45,000 students enrolled. Other activities will be run by libraries, churches and other community organizations.


The repercussions of the strike stretch far and wide as the police department will be putting a larger number of officers on the street to deal with potential problems. Those problems include protests and the knowledge that children will be out of school with nothing to do, according to Police Superintendent Garry McCarthy.

The teachers are already unhappy with Emanuel because he tried to lengthen the school day by an extra 90 minutes. When the union refused the deal Emanuel went around it but decided to stop pushing for it when challenged by the Illinois Educational Labor Relations Board.