Got a tip?
Home » Home » Law Office Wilmer Relishes Their Historical Role in Moving into the New World Trade Center 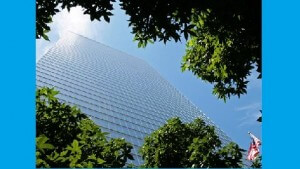 Wilmer Cutler Pickering Hale and Dorr’s chief administrative officer Marian Freed has been taking it all in. Exuberant to be part of living history, she has relished the details of her new office, the 7 World Trade Center, a model rebuilt where the third tower collapsed on September 11. The height of the ceilings, the make of the tables, the ergonomic chair models known as “freedom chairs” — she enjoys contemplating it all.

And the 7 WTC is a deal. Firms have cowered away from the fateful World Trade Center area, so rent’s cheaper than it was at Wilmer’s previous location — “substantially less” says New York office head Charles Platt. They will occupy 210,00 square feet across the the highest five floors other 52-story building.

Wilmer made the move after adding 23 attorney’s to their already hefty outfit. On Monday, 200 lawyers of their 350 set into the new office.


“People are really welcoming it because so much of the focus on New York City is downtown and Brooklyn,” said Platt. “Midtown is for tourists. Some people are looking at it as a reflection of the firm, which is very young, dynamic, and embraces change.”

And being young, dynamic, fresh and exciting, they have some exciting layouts in their new office. “Our offices will be configured so we won’t need as much hard copy,” Platt said. “It’ll be pretty exciting to unleash ourselves from these things.”

In their place they will have a “commons” instead of a library, which will have in addition to books wireless Internet for a relaxing surf on the information highway and also a Wii game system and coffee bar.


The new floor plans are also hip and up to date, efficiently able to house the same number of people in 10 to 15 percent less space.

7 WTC is part of the downtown revival, as the phoenix that was sunk by terrorist madness rises from its ashes. One World Trade Center will soon be their completed neighbor. Formerly known as the Freedom Tower, this epic erection will stand a symbolic 1,776 feet — the tallest building in the Western hemisphere.