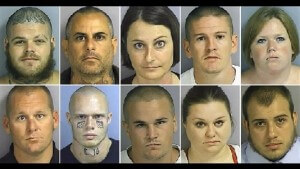 Seven leaders or the White Supremacist hate group American Front have been arrested in central Florida Wednesday for a set of activities that anticipated inciting what they called “an inevitable race war.” The top leaders, Marcus Faella and his wife, were training the group in hand-to-hand combat and drilling them how to shoot AK47s. The group was planning on surviving race apocalypse in which the whites would have to fight for their rights and their cultural hegemony.

This lived fantasy has broken a set of laws, however, including war training outside of the military. Said an affidavit:

“Faella views himself and the other members of the AF as the protectors of the white race. Faella has stated his intent during the race war to kill Jews, immigrants, and other minorities.” They were charged with paramilitary training, attempting to shoot into an occupied dwelling, and prejudices while committing an offense.


Their compound is surrounded by barbed wire fence, two pit bulls, and a building with firing positions. It is stocked with survivalist supplies such as food, water, and body armor.

“These arrests are an excellent example of how law enforcement agencies, working together, can help protect our communities from hate-motivated violence and terrorist,” said Andrew Rosenkranz, an ADL Florida Regional Director. “Their practice work stopped violent activity before it could happen.”

“This investigation is a results of our ongoing partnership with local law enforcement and federal agencies in a concentrated effort to stamp out the crime on our community,” said Lawson Lamar, a Ninth Circuit State Attorney.