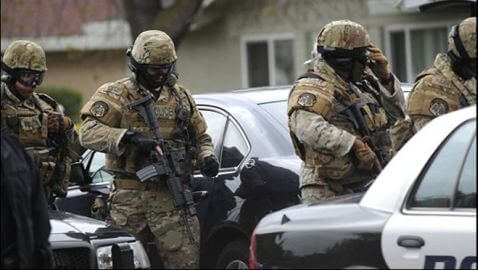 According to police, a fire at a Modesto apartment building that was raging during a standoff was pretty much contained by early Friday morning. Authorities also said that the status of a suspect in the shooting of a civilian and a deputy was still not known.

“We are hoping to get inside within the next few hours, once daylight breaks,” Modesto police officer Chris Adams said.


The incident began on Thursday night, not long after a civilian and a deputy were shot to death when authorities tried to serve an eviction notice in the city. No information about the cause of the fire has been released yet. The county sheriff says tear gas and flash-bang devices could have been the cause of the fire. The standoff lasted for close to 12 hours at the Whispering Woods development.

“One of my valued members of my team is dead,” Christianson said. “I am overwhelmingly frustrated that we don’t have the sufficient resources to protect the community.”


“There was another officer that was kneeling on the side of the house while they were laying there,” Yemen Zokari, a neighbor, said. “I think he was staying out of the way from being shot. We just felt so bad. We wanted to do something but you can’t. What can you do? It’s traumatizing to see them.”

Christianson is not sure if the deputies returned fire or not. Paris was a 16-year veteran of the department and is survived by a brother, two adult children and his parents. The name of the civilian killed has yet to be released. The suspect has been described as a person in the mid-40s with possible military training. It has not been confirmed if authorities were ever in contact with the suspect.


“There’s not much more information I can give out,” said Anthony Bejaran, a sheriff’s spokesman.

The development opened back in 2002 on what used to be the site for the Prescott Estates. The areas used to be known as one of the most criminally-plagued areas in all of Modesto. Prescott Estates was shut down by the city of Modesto and the property was cleaned and remodeled. Officers say the crime has decreased greatly at the site since the city shut it down to clean it up.