In Las Vegas, one of the most popular stops for food is called the Heart Attack Grill. The grill is also incredibly proud of the name it carries too. The grill warns those who walk inside that, “This establishment is bad for your health.”


The video taken on a cell phone of the heart attack turned into a viral video on the internet. Paramedics can be seen taking a man who was suffering from a heart attack out of the grill. The grill also advertises that the food that it serves can kill. This restaurant does not run from the publicity that other establishments would stay away from.

The owner of the grill, Jon Basso, said, “We throw slogans at you like, ‘Taste worth dying for.'”

Basso is referred to as Dr. Jon and he talks to his waitresses like they are nurses. Also, while dining at the grill, patrons wear hospital gowns.


“I am here to tell you straight out I am here to make a buck,” Basso said while also explaining that hundreds of restaurants serve food that is unhealthy. His restaurant is just 100 percent honest about what they serve to the clientele.

“Anything that is legal that you want to eat or drink that’s fun, that enriches your life at the moment, I will sell it to you,” Basso explained.


One of the customers of the Heart Attack Grill, Sharon Myers, said, “Every once in a while you have to indulge, so we thought we would indulge today.”

“Who doesn’t want to risk a little danger every once in a while. If I can put danger back into hamburgers, all the better,” Basso said.

One of the waitresses, Tracy Chamberlain, called 911 on Saturday night because one of the customers who was eating the Triple Bypass burger felt that he might need one.

“I am nowhere near a nurse,” Chamberlin said. “I just play one when I come to work”

“People were taking pictures,” Chamberlin said. “I had people ask me, ‘Is this a stunt, do you do this on a regular basis? (I said,) ‘No, it’s not a stunt, this is for real, this man is sick.'”

The name and the condition of the customer were not released by paramedics because of medical privacy rules. Paramedics did mention that he probably would be alright. And just to be sure it was not a publicity effort by the grill, the Las Vegas Fire and Rescue confirmed that a man suffering from heart attack symptoms was taken from the restaurant and transported to the hospital. 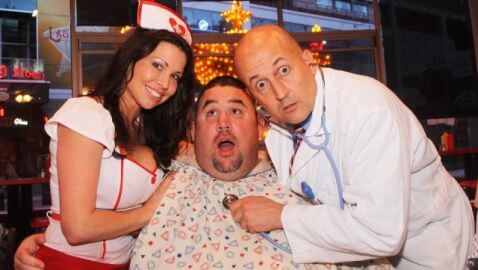