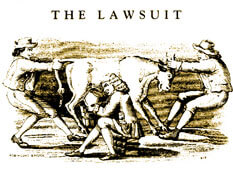 Former Dechert LLP associate Marc Dubin has sued the firm for allegedly making false promises to lure him to the Philadelphia firm, and for allegedly firing him for being Jewish.

Dubin’s suit seeks nearly $6 million in back pay and damages.

The firm and its counsel at Miller & Wrubel say that every one of Lubin’s claims is false. Dechert says no one lied to Lubin during the interview process in October 2002, and they deny the allegation that Lubin’s religion played a part in his dismissal.


Dechert’s team also says the suit is barred by statute of limitations rules and seven other affirmative defenses.

As for Lubin’s claim that he was a highly sought-after commodity who left a “secure” $215,000 job at Skadden, Arps, Slate, Meagher & Flom for the chance of more fulfilling work at his new firm, Dechert again challenges the notion. It denies that Lubin’s job at Skadden was actually “secure,” though the firm doesn’t explain how it knows this.

Skadden did not immediately respond to questions about Lubin’s tenure there.


Lubin had been at Skadden since about 1999 after short stints at both Weil, Gotshal & Manges and Latham & Watkins. He graduated from Columbia Law School in 1994.

He claims Dechert offered him work on a complex deal involving the securitization of attorneys fees from tobacco litigation. The deal, which he described as “poorly organized” and “in total disarray” by the time he arrived, eventually fell apart, Lubin’s complaint says.


I gotta tell ya, if I could sue ex-employers for giving me a crummy job, I’d be a billionaire.

Via Am Law Daily.