Got a tip?
Home » Breaking News » U.S. Embassy in Cuba Open Once Again 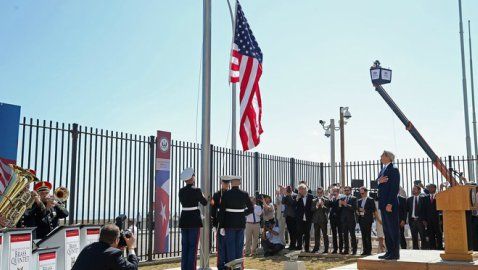 Summary: With the opening of the U.S. Embassy in Cuba after 54 years of being closed, the hopes of a better future are looking as slim as ever.

The doors may be open to the U.S. Embassy in Cuba again but the relationship between the two countries is not perfect yet. Secretary of State John Kerry raised the flag at the Embassy for the first time in 54 years on Friday.


The official Cuban media released an article in the name of Fidel Castro on his 89th birthday, the day before Kerry raised the flag. The article discussed the damage the American embargo has caused to the nation and the dropping of the atomic bomb on Japan instead of focusing on the big step between the two countries of possibly making nice again.

Another clear sign that relations are not much better than they were was the fact that no Cuban dissenters were invited to the flag raising ceremony. Instead, they are allowed to attend a second ceremony that is closed to the press at the home of U.S. chief of mission. Many politicians with ties to Cuba, such as Florida Sen, Marco Rubio, call the act a ŌĆ£propaganda rally for the Castro regimeŌĆØ and ŌĆ£shamefulŌĆØ.

New Jersey Sen. Bob Menendez says the flag should not be someplace that does not respect the same values, ŌĆ£a flag representing freedom and liberty will rise today in a country ruled by a repressive regime that denies its people democracy and basic human rights.ŌĆØ


While some restrictions have been removed, there is still a long road to travel before the countries are in good standing again.