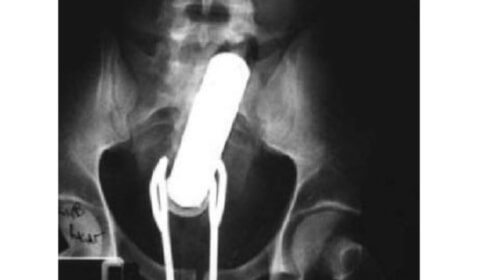 The story is from a segment on “Sex Sent Me to the E.R.” which is airing Saturday on TLC. Stevey Pope, who lives in Fresno, California, says the patient came in to the hospital with his wife complaining of severe constipation, according to the Hufington Post. He was then X-rayed and examined by a doctor closely. Stevey Pope shares that it was a very sticky situation.


Sex Sent Me to the ER is a television series on the TLC network that premiered on December 28, 2013. The show has actors reenact real-life accidents that occurred during sex. A preview reported on by The New York Post included segments on a 440-pound man who put his 110-pound girlfriend’s head through a wall, a woman who suffered a two-hour orgasm and a man who broke his penis while having sex with his wife and his girlfriend.