Got a tip?
Home » Celebrity News » Young Actor Shia LaBeouf Making Not so Good of an Impression in Berlin and Online 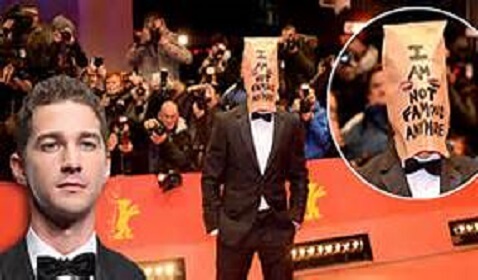 On Sunday while promoting his new film, Lars von Trier’s, Nymphomaniac: Volume I, at the International Film Festival in Berlin this weekend, LaBeouf was asked what it was like to shoot a movie with so many sex scenes. He ambiguously answered, “When the seagulls follow the trawler, it’s because they think sardines will be thrown into the sea. Thank you very much.” After answering the one question LaBeouf got up and walked away.


Later that evening LaBeouf showed up at the gala premiere of Nyphomaniac, dressed in formalwear, wearing a paper bag over his head. The bag had two cut holes for his eyes and a message scribbled across it. The bag read “I am not famous anymore.” No one’s really surprised considering he’s been declaring that online for the past month. According to Twitter, he also said online that he was retiring from “all public life.” Of course, fans of the Transformers star will literally be crying into their Deceptacons pillows.