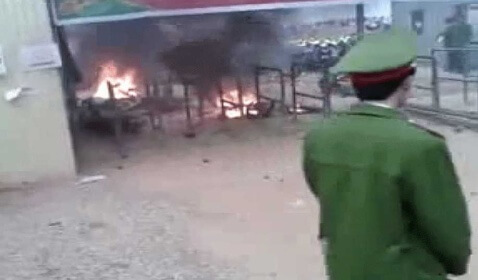 Samsung was founded by Lee Byung-chul in 1938 as a trading company. Now, the South Korean electronics giant, Samsung Electronics is building a new $3.2 billion factory in northern Thai Nguyen province. But it looks like the new factory is already experiencing problems before it even opens. Vietnamese police are launching an investigation into the riot that broke out that left 13 people injured, four critically as reported by Business Insider. It is a disagreement between workers and security guards over safety protocols at the site, according to ABC News, that is what triggered the outbreak of violence at the factory site.

The director of the provincial police, Nguyen Nhu Tuan, said that it took about four hours to restore order. Footage of the riot was filmed by witnesses and posted to YouTube. The video showing black smoke rising from a large fire, and motorbikes torched. Some of the workers even attacked and injured the local policemen, throwing bricks.


According to South Korean media, the Samsung Company has invested $2 billion in the factory. The giant and competitor to Apple said in a statement that, “We will do our utmost to prevent any such incidents from recurring in the future.” Samsung is making the country of 90 million people a major manufacturing base for its smartphones. Samsung, named the world’s largest information technology company measured by 2012 revenues, can expect growth, but definitely needs to work along side its factory employees to achieve their goals. Hopefully, the smartphone giant will get back on track to producing great phones. For job opportunities at Samsung click here.