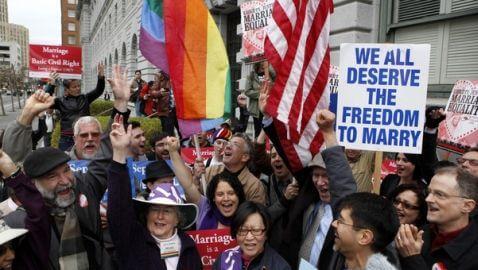 On Tuesday, the United States Supreme Court began hearing arguments in the case of California’s ban on same-sex marriage, known as Proposition 8, according to The Associated Press.


In nine states, same-sex marriage is legal. Those states include Connecticut, Iowa, Maine, Maryland, Massachusetts, New Hampshire, New York, Vermont and Washington. It is also legal in the District of Columbia. In 30 state constitutions, same-sex marriage is banned. Ten states ban the marriage under state laws. New Mexico has not taken a position regarding the issue.

The couples challenging Prop 8 include Kris Perry and Sandy Stier of Berkeley and Paul Katami and Jeff Zarrillo of Burbank. Their lawsuit was filed in May of 2009 and asked that the same-sex marriage ban approved by voters in November of 2008 be overturned. Same-sex marriages began occurring in California in June of 2008.

During the five months that same-sex marriage was legal in the state, 18,000 couples were married. All of those marriages are still valid in the state. Arguments in the case have ended for the day.