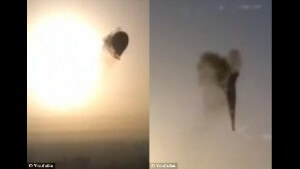 In what is probably history’s largest hot air balloon accident, nineteen people have died in Luxor Egypt, when they hit a power line and some part of the gas tank caught on fire and exploded. As it was crashing, many attempted to save their life by jumping into the sugar cane field below, but only one person, the pilot, survived the fall. The other person to survive was a British man who remained in the balloon.

Health Minister Mohamed Mostafa Hamed explained that the pipe linking the gas canisters to the burner caused the blast, saying “I saw a fire in the balloon’s basket. Due to the fire, the balloon lost [altitude]. It was out of control.

“It jerked up and dropped down again 30 metres. There were some people jumping from the balloon and falling into the sugar can fields before it crashed.”


Among those who died were nine Chinese nationals, two French, four Japanese, and three British.

The Daily Mail detailed who the British victims were, including Joe Bampton, 40, who studied at Slade College of Fine Art and had work exhibited at the Royal Academy. He and another victim, Miss Gyetvai, worked for an auction house in Chelsea.


“They were two people very much in love and a lovely couple. They were companions to each other.”

He later continued: “The word I would use to describe Joe is very peaceful. He was a very gentle and quiet man, laid back and happy.


“He didn’t try and make jokes all the time but when he did say something it was normally very funny. He was a very loved person.

“Joe came to us in the mid nineties. He had been with us for a long time and we knew him very well. We are all very close here, like a family.

“He was very passionate about his work and I worked with him closely. He was very successful at it.

“I broke the news of his death to one of our clients today and he broke down in tears.

“It is very tragic. It’s a very hard thing to come to terms with, it’s like losing a brother. Joe’s death will leave a huge hole. We are all just in shock at the moment.”

The pilot, one of the two to survive the wreck, is in the hospital with 70 percent burns.

The Foreign Office said in a statement, “I know the pilot — he’s a good pilot. The problem wasn’t him, it was the balloon — what could he do? Everyone in our company is shocked and very sad about what’s happened.”