Got a tip?
Home » Breaking News » Do E-Devices Really Pose a Problem For Airplane Take-offs? 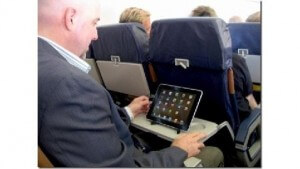 Few of us are full-blown Luddites, but as new sci-fi resembling technology keeps coming in to impress the markets, there is a conservative voice in each of us that wonders if we’ve gone too far, or if all these new-fangled gizmos really safe. Cell phones, at their clunky inception, were widely feared to cause brain cancer, a belief that outran actual scientific studies on the matter. Other times, our misapprehensions are justified, as now “texting while driving” is gaining the stigma normally reserved for “drinking while driving.” Nevertheless, I agree with Nick Bilton in his piece “Disruptions: the Real Hazards of E-Devices on Planes,” that it is mostly unnecessary to turn off e-devices — iPads, ereaders, cell phones — during the plane’s take off and touch down. Indeed, having recourse to such devices may alleviate anxiety at those two scariest moments of a plane trip.

Bilton cited a half dozen cases of men and women being arrested for using technology during plane take off, such a passenger in El Paso who was arrested last September for refusing to turn off his cell during landing. More often, passengers are shouting or attacking each other, believing this technology interferes with the plane, as in 2010 when a 68-year-old man punched a teenager for leaving his cell phone on.

In an interview with Les Dorr, a spokesman for the F.A.A, Bilton received contradictory reports regarding the logic of the prohibition. First of all, there was the belief that the devices may create electrical interference with the working of the plane, and second of all, that it was necessary for passengers to pay attention during take off.


The first suggestion doesn’t seem to be believed even by the F.A.A which allows pilots to use iPads instead of paper flight manuals. Though the F.A.A. claims that “two iPads are different than 200,” experts at EMT labs disagree, saying that there is no difference in radio output between two iPads and 200: “Electromagnetic energy doesn’t add up like that,” they said.

This is why lawmakers are pressuring the F.A.A. to ease up on their needless regulations. In December, Senator Claire McCaskill sent a letter to the F.A.A. claiming the public was “growing increasingly skeptical of prohibitions,” on electronic devices used during takeoff. She also said she was “prepared to pursue legislative solutions should progress be made slowly.”

Progress is nevertheless being made, since as of October, the F.A.A has agreed to review its policies on these matters, though no definite time-scale has been spelled out. It is hoped that the Luddite intuitions about electronic devices infecting the airways with radio signals will break away like fog under sunlight, and that the take off and touch down of planes will be less constricted with needless rules.