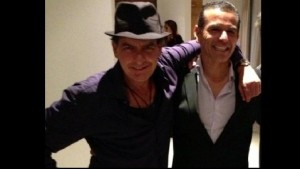 It would be foolish to expect Charlie Sheen to behave. Even if he doesn’t have the reported mental illnesses, or even if he isn’t taking any drugs, his personality is naturally volatile. That is his entire appeal. So when he was hosting the opening of his new bar in the popular hotel in Cab, El Ganzo, it really isn’t surprising that his rhetoric at one point took a turn for the worse.

He had been shaking hands and taking pics, making a generally favorable impression on all involved, but when he was trying to warm up the crowd, he called out, “How we doing? … Lying bunch of f**got a**holes, how we doing?!”

Oh Charlie! You have to know by now that there are a few words you simply must avoid if you have achieved a celebrity’s share of the media’s attention.


For his part, he tells TMZ that “I meant no ill will and intended to hurt no one and I apologize if I offended anyone,” and also “I meant to say maggot but I have a lisp.” The second sounds like an obvious cop-out. His vernacular is strongly informed by subversive internet culture, such as his reference to his past costar on Two and a Half Men as a “troll,” so slips of the word “f**got,” which is a shibboleth to such a crowd, might come naturally enough, and probably without anti-homosexual intentions. Nevertheless, Charlie should know better.

Paris Hilton, on the other hand, probably didn’t know better when she joked that most gay men “probably have AIDS,” and when Lindsay Lohan Tweeted that everybody should calm down over Hurricane Sandy, she was only being herself. Likewise, Megadeth’s Dave Mustaine’s rant accusing Obama of orchestrating the Aurora, Colorado, massacre is entirely consonant with the performer’s apocalyptic imagination.

Celebrities will always be themselves, even in this age of instant and ubiquitous communication accessibility, only now the rest of us get to hear more about it.