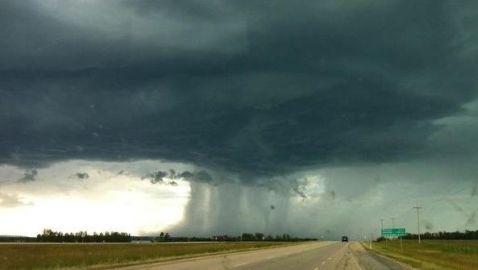 Until Christmas Day 2012, Little Rock, Arkansas had an 86-year record for snowfall. When a winter storm hit the city yesterday, it dropped nine inches of snow, according to CNN. The storm systems that ravaged most of the middle portion of the country, spawning tornadoes in the South and snow in the Midwest, began their trek eastward on Wednesday with the Middle Atlantic and New England states in their sights.

Since the storms erupted on Tuesday, three people have been killed and now the largest threat for severe weather is focused on South Carolina, northern Florida and southeast North Carolina. The systems spawned close to 30 tornadoes on Christmas Day.


One man died in Arkansas, according to the state’s emergency management officials, but did not release details. The National Weather Service said that the storms on Wednesday are “capable of producing more widespread damaging wind gusts and have the potential for tornadoes.”

Bonnie Schneider, a meteorologist for CNN said, “this extreme weather will make travel treacherous for millions of Americans this day after Christmas.”

In Mississippi, over 25 storm-related injuries were reported, according to the state’s emergency management office. There were no deaths reported in the state. Close to 70 homes were damaged, with the majority coming in the southern area of the state. A state of emergency was declared on Tuesday by Governor Phil Bryant for multiple counties. He noted that eight counties reported damage and injuries.


Maj. Chris Heathscott said that the National Guard has been deployed in Arkansas to assist in ambulance support. “I couldn’t get out of my driveway this morning, so I had to walk the five miles to our offices at Camp Robinson in North Little Rock,” he said. “I may have to just sleep here in the office tonight.”

At least two people were killed by the storms on Christmas. In Texas, a 25-year-old man died when a tree fell on his pickup truck as he drove in Houston, according to Harris County Sheriff’s Deputy Thomas Gilliland.


In Woodward, Oklahoma, a 28-year-old woman died in an accident on a highway covered in snow. The victim, Amanda Goodman, was ejected from an SUV she was in after the driver lost control and struck an oncoming truck, according to the Oklahoma Highway Patrol. She died at the scene. The driver and a 4-year-old passenger were taken to a hospital.

While driving on Interstate 165 in Mobile County, Alabama, David Saraceno saw a tornado on the side of the road. “It looked like it was about two miles away from us,” Saraceno said. “I put the pedal to the floor to try and get out of harm’s way, but it seemed to be getting closer and closer.”

Saraceno began to panic so he exited the roadway in Chickasaw, drove a different direction and then turned around to return home.

“We drove right back into a path of destruction,” he said. “It appeared that the tornado turned and came over the interstate about three minutes away from where we would have been if I did not get off the interstate. We saw a roof that must have blown off a house. Cars were pulled to the side of the road. There was a lady whose windows were shattered. It was too close for comfort.”