Got a tip?
Home » Breaking News » Russia for Revenge Against the U.S. Bars American Adoption of Russian Orphans 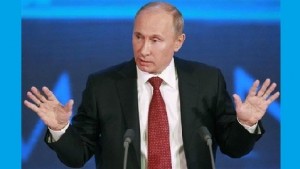 Russia has passed legislation barring Americans from adopting their orphans, and this as a sort of revenge for unrelated American legislation. America passed the U.S. Magnitsky Act, which forbids certain Russian politicians from visiting the states; it is meant to redress the torture and death of Russian lawyer Sergei Magnitsky who had discovered Russian officials had stolen $230 million form the Russian treasury and who was later imprisoned for exposing them. Since the Russians find such legislation humiliating, they wish to strike back at the States. For this, the adoption angle seemed a handy bit of leverage by which to strike.

When asked in a press conference why Vladimir Putin had made “the most destitute and helpless children into instruments of political battle,” he responded how the journalists could ignore the U.S. as it “humiliates” Russia. “You think that’s normal? What’s normal about being humiliated? You like that? What are you, a sadomasochist? The country will not be humiliated.”

Russian Lawmaker said this reaction is “zhlobstvo” a Russian word combining ideas of rudeness, pigheadedness, and spleen. This is a sentiment shared by many Russians. But his party would nevertheless support it as it was a Kremlin initiative. “It is a question of pride,” he said. “Our sovereignty has been threatened [by the Magnitsky Act] and we need to hit back. Maybe it sounds dumb, but it’s part of the Russian mentality.”


The official justification for barring is the typical bullshit one might invent. During the past 20 years, only 19 of the 60,000 Russian children adopted by U.S. families have died through negligence or domestic violence, much better than at Russian orphanages. Alexei Pushkov, chairman of the Duma’s foreign-affairs committee, and host of a popular government propaganda talk show, nevertheless says, “But if the U.S. federal authorities wanted, they could act to at least restore a sense of justice. These parents adopt children to get extra welfare benefits, to get money, or they just began to hate this child. It doesn’t matter. There needs to be justice. It is a nationwide consensus. This is why we initiated.” His misuse of the word “justice” here ought to burn his tongue.

In Russia as a whole, 39 percent of those polled supported the U.S. Magnitsky Act while only 14 percent opposed it. Nevertheless, when the vote went up to bar American adoption, only four Duman deputies voted against it, two abstained, and 400 voted in favor. Sometimes pride outweighs compassion.