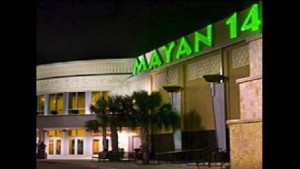 In what feels like gun overload, yet another theater shooting took place late Sunday, in San Antonio, Texas, where two movie-goers were shot before an off duty office shot the gunmen. Not much information has been released, as of yet, but all three gunshot wounds — the victims’ and the gunman’s — were apparently not life-threatening.

The gunman may have been initially provoked by a fight with his girlfriend. The shooting began at China Garden next door and “Carried on into the theater.” The Santikos Mayan Palace 14 Theater complex on Southwest Military Drive panicked around 9:25 p.m. when patrons scrambled and screamed to feel the scene.

Said Cassandra Castillo, a mother of a projectionist, who waited anxiously outside the theater to see if he was alright, “It brings back memories of the other theater shooting, and the elementary school shooting. You only think the worst.”


Many shots were fired, and the gunman even shot at a San Antonio Police Department patrol car. Detective Louis Antu notes that “he was shooting at a marked unit. He knows he was shooting at an officer so that’s [an] automatic [charge of] attempted capital murder.”

The off duty police officer who was working at the theater “took all appropriate action to keep everyone safe in the movie theater,” Antu said.

How many more theater shootings before we either grow jaded, not bothering to call it news anymore, or we became so anxious we can’t even enjoy going to see a movie?