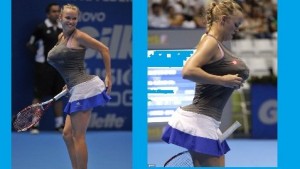 Caroline Wozniacki, the former No. 1 women’s tennis player, proved that too many people lack a sense of humor. During an exhibition against Maria Sharapova in Brazil, Wozniacki stuffed her bra and shorts to make her look curvaceous, in imitation of fellow tennis player Serena Williams. She later explained in a press release that she was doing an impression of her friend and fellow tennis player, saying, “I really love the crowd here, they’re open and they have a lot of fun.”

Not everybody can have fun. Some believe that being curvaceous is a peculiarly black thing — despite being in Brazil! — and that the gesture was racist. As feministing.com’s article reads, “Given the history and current-day context of racialized standards of beauty, and the hypersexualization of people of color, when a white woman makes fun of a black women’s body, especially in a way that hypersexualizes her and draws on the stereotype of black women’s big butts, it’s racist.”

In other words, making fun of your friend is racist, if you’re white and she’s black. Nevermind making fun of her individual characteristics; the critics of this little prank are supposing Wozniacki wasn’t making fun of a fellow tennis player, but an entire race! Cultural oversensitivity is as bad as the thing it attempts to fight.