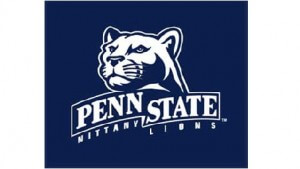 In an attempt to reinstate their relevance and address one of the most appalling abuses of power in sports history, the NCAA has hit Penn State with the largest penalties every administered to a university — and they have complied to them. Following the conviction of Jerry Sandusky for serially raping children who participated in the Penn State scholarship, after which the FBI’s investigation revealed that Penn State University’s officials had known about these crimes for over a decade, but hid them to protect their football team, the NCAA has imposed a series of exacting measures to make the message clear that there are things more important than football, such as the safety of children.

Amidst the penalties the university will pay are a $60 million sanction — about what the amount the university makes from a football season — to be paid to programs outside the university that help address problems of rape and child abuse; the team will be barred from playing in the bowl for the next four years; the team’s football winnings from from 1998 to 2011 will be revoked, dropping Joe Paterno’s all-time career win record from #3 to #12; the university will be allowed ten less football scholarships per year, a reduction of 25 to 15; and any players who no longer want to play for Penn State will be allowed either to keep their scholarships and not play, or transfer to the University of their choice.

The NCAA stopped short of the “death penalty” of barring the school’s football program for 1 season, believing this array of punishments will have the desired affect of changing Penn State culture. As they explained:


“By perpetuating a ‘football first’ culture that ultimately enabled serial child sexual abuse to occur, The Pennsylvania State University leadership failed to value and uphold institutional integrity, resulting in a breach of the NCAA constitution and rules.”

Mark Emmert, the NCAA president, regards the case the most painful “chapter in the history of intercollegiate athletics,” the punishment “greater than any other seen in NCAA history,” and Penn State’s full cooperation “remarkable.” It seems the university has been so demoralized by the Sandusky case and the revelation of Penn State conspiracy to hide the facts that they are willing to take whatever punishment is devised against them.

“I will do everything in my power to not only comply,” said Penn State Coach Bill O’Brien, “but help guide the university forward to become a national leader in ethics, compliance, and operational excellence. I knew when I accepted the position that there would be tough times ahead. But I am committed for the long term to Penn State and our student-athletes.”


Whether the university can turn around from being the most irresponsible university to become a “national leader in ethics,” may be questionable, but perhaps the sanctions will prod them in the right direction.