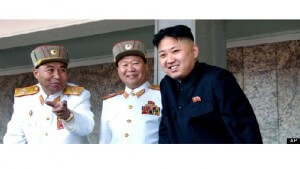 Ri Yong Ho has often been photographed between Kim long Un’s father and himself, was present with a small band of men at the father’s funeral, and has always held an intimate place in the upper entourage. Nevertheless, when a meeting of the Worker’s Party was abnormally convened Sunday, and the military leader was dispatched on grounds that he was ill, commentators everywhere are skeptical.

After all, he has been photographed just a week earlier and appeared in good health. And since transparency has never been a North Korean government goal, many political analysts are left speculating.


“Whether because of a physical malady or political sin, Ri Yong Ho is out, and Pyongyang is letting the world know to not expect to hear about him anymore,” said John Delury, who is an assistant professor at Yonsei University’s Graduate School of International Studies in South Korea.”

We are uncertain “whether Ri’s stepping down is a manifestation of civil-military tensions, or Kim Jon Un’s attempt to consolidate control,” he continued.

The move could also reflect a power struggle between Ri and Choe Ryong Hae, who, as Koh Yu-hwan, professor at Seoul’s Dongguk University, says, “after Kim formally took power, Choe has emerged No. 2.”


Daniel Pinkstone, a North Korean analyst, was likewise unconvinced of the claims to illness, noting that though Ri received major promotions in the September 2010 party conference, he received none in April, perhaps anticipating government plans for him.

Delury also opined that this might have been the goal all along, noting that since Ri only became prominent in Kim John Il’s final years, “he was always meant to be a transitional regent figure, and his functions is played.”


Whatever the real meaning of the oracular dismissal of Ri, it remains hard to interpret it from this side of North Korea’s border.