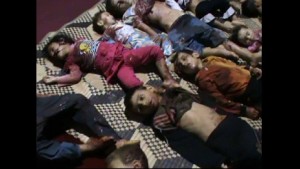 Russia is being forced to revise its defense of Syria now that over a hundred men, women, and an alarming number of children have been massacred this weekend in Houla. Though Syria’s leader, Bashar Assad, denies responsibility for the death of the men and women, 20 of which succumbed to heavy military attack, and the rest which were stabbed to death — sometimes whole families in their home — nations across the world have nevertheless evicted Syria’s foreign ministers in response tot he outrage that the rest of the world blames on Assad.

“Bashar al-Assad is the murderer of his people,” said French Foreign minster Laurent Fabius. “He must relinquish his power. The sooner that better.”

“This massacre of more than 100 men, women, and children in Houla was a hideous and brutal crime,” said Australia’s Foreign Minister Bob Carr.


Germany’s Foreign Minister Guido Westerwelle similarly expelled the Syrian ambassador on Tuesday, saying “The Syrian regime is responsible for the terrible actions in Houla. Whoever there or elsewhere violates the U.N. security council resolutions by using heavy weapons against their own people must bear serious diplomatic and political consequences.”

Similarly, Canada planned to dispel their Syrian diplomats saying, “Canada and our partners are speaking loudly, with one voice, in saying these Syrian representatives are not welcome in our countries while their masters in Damascus continue to perpetrate their heinous and murder acts.”

The U.N. spokesman Rupert Coville carried the same tone, “Almost half of the ones we know of [who perished at the Houla massacre] are children — that is totally pardonable — and a very large number of women as well. At this point, it looks like entire families were shot in their own homes.”


Because of all these united voices, Russia, which has previously defended Syria and which is Syria’s last global ally, is rethinking its relationship to that country, a country led by Assad, who claims that his army acted in self-defense against these men and women, and who also says that Western opinion over his country amounted to nothing but soap bubbles. Russia does insist that the rebels share part of the blame for this massacre, but they are no longer so categorical in their defense of Assad’s government.