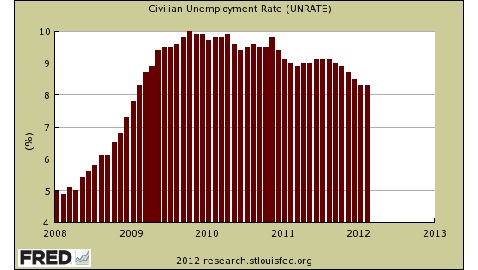 In the month of April, unemployment fell to 8.1 percent, which is the lowest it has been since January of 2009. The decline in the rate is mostly due to 342,000 people who left the workforce. This means that the Bureau of Labor Statistics stopped counting them as unemployed persons. In the country, the number of people who were unemployed dropped by 169,000. Employers in the nonfarm industry added 115,000 jobs in April but it is a number that was less than the 170,000 predicted by economists.

There are close to 12.5 million people still without jobs in the country and a record 88.4 million people are considered out of the workforce. According to the Bureau of Labor Statistics, the labor-force participation rate, which is the percentage of the work-age population working or searching for work, dropped to 63.6 percent. This is the lowest number it has been since December of 1981.


The White House has continually noted that the recovery of jobs has been a legacy of the recession that began during the watch of the Bush administration.

“Much more remains to be done to repair the damage caused by the financial crisis and the deep recession,” Alan Krueger, who is the chairman of the White House’s Council of Economic Advisers, said in a statement. “It is critical that we continue the economic policies that are helping us dig our way out of the deep hole that was caused by the severe recession that began at the end of 2007.”


“While some would like to attribute the lack of hiring to uncertainty and regulatory roadblocks, the fact is that demand for goods and services simply has not reached a level that warrants accelerated hiring. In areas, where demand has improved, so has hiring.”

Payrolls in the United States are still 5 million jobs shorter than when the recession started. For a length of 27 weeks or longer, 5 million people have been unemployed. The average length of unemployment has been 39 weeks. A large number of workers are exiting the workforce due to retirement or in order to collect Social Security disability benefits. On the other side of things, an undetermined amount of people have stopped looking for jobs.


“If someone spends two years sending out resumes with almost no response, don’t I give up or go back to school?” Neil Dutta, an economist for Bank of America Merrill Lynch, said.

According to the Economic Policy Institute, the average of job growth for a three-month span has been 176,000 jobs per month. This number is good enough to prevent unemployment from rising but it is not good enough considering how deep of a hole the market is sitting in right now.

“The labor market continues to very slowly improve,” EPI said in a press release, “but it is a far cry from the 300,000 or 400,000 jobs we would need per month to get back to full employment in a reasonable timeframe.”