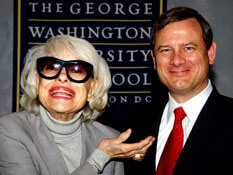 Despite calls throughout the nation for state and federal employees to take pay cuts or involuntary furloughs to save tax dollars in the economic meltdown, US Supreme Court Chief Justice John Roberts Jr. is demanding that Congress pass pay raises for federal jurists as soon as possible.

In his year-end report on the state of the federal judiciary, Chief Justice Roberts praised the courts as frugal, dedicated and crucial to the life and economic recovery of the nation. But to keep the courts strong, Roberts said, Congress needs to pass pay raises, or at least cost-of-living increases, for federal judges.

“Given the judiciary’s small cost, and its absolutely critical role in protecting the Constitution and rights we enjoy, I must renew the judiciary’s modest petition: Simply provide cost-of-living increases that have been unfairly denied!” Roberts wrote in his report. “We have done our part — it is long past time for Congress to do its.”


In 2007 the judiciary committees of both the House and the Senate endorsed substantial pay increases, but the bills languished as the financial state of the nation worsened.

Roberts says judges are the only federal employees to begin 2009 without a cost of living increase.


Roberts emphasized that the judiciary is a bargain for taxpayers whose benefits to society far outweigh its costs.

Noting that the budget of the judicial branch in 2008 totaled $6.2 billion, Roberts said, “That represents a mere two-tenths of 1% of the United States’ total budget. Two-tenths of 1%! That is all we ask for one of the three branches of government — the one charged to guard the Constitution and the rights of individuals.”


Roberts devoted several pages of his report to the cost-cutting measures the courts have undertaken to limit rent, personnel and information technology costs. Taken together, these measures should save up to $300 million through 2017, Roberts reported.