Got a tip?
Home » Legal News » Layoffs at Dreier? Receptionist Surprised to Hear It 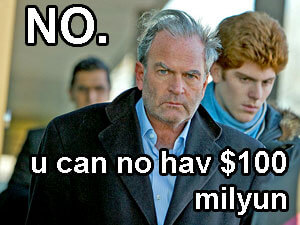 Eager to learn more about what’s going on at Dreier LLP, we sent our own stalwart video reporter JIllian Elizabeth over to the beleaguered law firm’s fancy Santa Monica offices with a handheld video camera and a mission — find out what’s going on in the wake of Marc Dreier’s arrest.

Jillian managed to get inside the doors and speak to someone who may have been the receptionist, but she wasn’t allowed to take video.


The receptionist would not discuss the arrest, but when Jillian asked about the dissolution of the firm, the woman treated her like she was crazy.

Really? Crazy? Let see, according to that gossip-mongering tabloid, The Wall Street Journal:

The news about the Toronto arrest set off a chain reaction at Mr. Dreier’s firm, with some partners announcing they were leaving and starting their own firm, including a 10-lawyer patent-law group, a team of bankruptcy lawyers and Dreier’s matrimonial group.


One litigation partner said he spent Saturday packing up his personal effects. “Bank accounts have been frozen; they’re shutting our BlackBerrys down on Monday,” he said.

So no, Jillian, you’re not the crazy one.