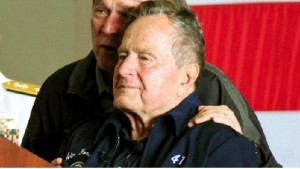 George Bush senior has been suffering some health issues lately, starting with a persistent cough due to bronchitis, which had him hospitalized since Nov. 23, and recently a relentless fever that kept him hospitalized over Christmas. The former president was put in the intensive care unit at Methodist Hospital Sunday “following a series of setbacks including a persistent fever,” said his spokesman Wednesday.

Though the cough has cleared up, Bush, 88, may expect some time before his health is stabilized. Jim McGarth, his spokesman in Houston, said the doctors are cautiously optimistic, but that he remains in “guarded condition.”

The fever had in fact gotten worse Wednesday, so his doctors put him on a liquids-only diet.


“It’s an elevated fever, so it’s actually gone up in the last day or two,” said McGrath to the Associated Press. “It’s a stubborn fever that won’t go away.”

Bush also suffers from a form of Parkinson’s disease that has bound him to a wheelchair. He has been surrounded by loved ones during his illness.