Got a tip?
Home » Breaking News » Lisa Jackson Steps Down from Heading the EPA 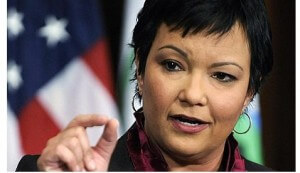 When Lisa Jackson became the first African American to head the EPA, she entered the job with high pressure and expectations to counter the lax eight years of President W. Bush, himself an oilman. After four years, she is making a move Cabinet members commonly do when wishing to move on: she is stepping down at the beginning of the President’s second term.

“I will leave the EPA confident the ship is sailing in the right direction, and ready in my own life for new challenges, time with my family and new opportunities to make a difference,” her statement reads. She is expected to leave after Obama’s State of the Union address in late January.

If her career was checkered between successes and loses, that should still count as an overall victory, considering the difficult position the EPA has been in. With 17,000 employees and an $8 billion budget, the position would naturally be challenging enough; but when Republicans gained the House in 2010, the stage was set for a struggle to pass the legislation she hoped for. Many made reference to her “job-killing” regulations, and a coal industry official even blamed her for waging “regulatory jihad.”


While she had to face a tricky Senate, environmental groups meanwhile viewed her compromises as betrayal, and withdrew their support. Her effort to reduce global warming emissions passed the house in 2009 but was soon abandoned after the economic concerns became the number one priority. Her bill, referred to as cap-and-trade, which would create a nationwide system where power companies bought and sold pollution rights, was therefore scuttled.

A clean-air regulation to reduce smog was also dismissed after Republican lawmakers denounced the rule as making companies unable to create jobs.

Likewise, the White House also dropped its environmental concerns after the economical crisis, wishing to focus on jobs, and intending only to have a “conversation” on climate change.


Nevertheless, her career also won her successes. She passed regulation that will over the next 13 years require all vehicles to average 54.5 mpg — it is now at 28.6 mpg — thus doubling fuel efficiency for cars and light trucks. She has set rules that limit mercury pollution in power plans. She has persuaded the administration to drop the Keystone XL pipeline plan, which would bring carbon-heavy tar sands oil from Canada to Texan refineries.

President Barack Obama spoke well of her after she announced her decision to leave. “Under her leadership, the EPA has taken sensible and important steps to protect the air we breathe and the water we drink, including implementing the first national standard for harmful mercury pollution, taking important action to combat climate change under the Clean Air Act and playing a key role in establishing historic fuel economy standards that will save the average American family thousands of dollars at the pump, while also slashing carbon pollution.”


In an interview Wednesday, she said she is looking for some time to decompress, and that she has not yet begun looking for a new job.